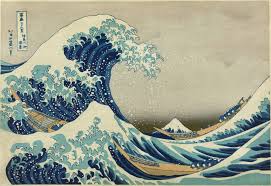 Good afternoon Ethryllites. I hope you have all been enjoying the first sunny days of spring. This week’s song insight is into  “The Eel Reel” a jolly sounding song with a dark story behind it. Before we begin, a quick update for you.

On 12th May 2016 Ethryll will be appearing with two other groups / artists (which are still to be confirmed) at The RS Bar at the Royal Standard , 156 St. Mary’s Road, Sheffield S2 4AX. We will let you know as soon as we have more details on the other artists. Hope we can see you there.

Don’t forget the RoofRaiser for Refugees on Saturday 14th May 2016, at Shakespeares in Sheffield. This is for a fantastic cause, we hope you can make it down to lend your support.

You may be surprised to learn that the Eel Reel is a cautionary tale for children about tsunamis. Tsunamis are caused by massive seismic events (earthquakes and volcanic eruptions). They can cause devastation hundreds and even thousands of miles away from the epicentre. People affected by a tsunami may not feel any other effects of the earthquake.

The tsunami caused by the eruption of Krakatoa in 1883 was recorded to be as high as 46m when they destroyed the town of Merak. They travelled far enough to rock ships off the coast of South Africa and fluctuations in sea level were even detected in the English Channel. Since the cataclysmic Boxing Day Tsunami in 2004 an improved networks of sensors in the Pacific ocean can give the people living along the Pacific Rim a life saving warning. Nature does, however, give it’s own short warning of a Tsunami about to strike. The sea rapidly and eerily retreats, often far further than a normal low tide. Minutes before the Boxing Day tsunami hit, people were going down to the beach to photograph the retreating sea and stranded marine life. However, this few minutes warning, could have given more people time to reach a safer place.

The Eel Reel begins with a young child waking their parents early to come and look at the beach. The sea has run away, and the sands are covered with fish flapping and dancing desperately about. It moves into a chorus where the child fantasises about dancing and playing with the fish. The odd pun in the lyrics, and the quirky similes convey the child’s joy and wonder at the phenomenon.

The reel section really tests the nimble fingers of the band as each repeat through the reel is faster and faster and more embellished. As the song ends, it tells how the child’s parents know the significance of the sea running away. They rush the child, who is innocent of the danger, to the best haven they can reach in time. The highest room of a strong building. Hopefully, in future, more people will know the meaning of a rapidly retreating sea.

Here you can watch an early video clip of the Eel Reel at Acoustic Edge.

Wake up! Mummy! Daddy!
I know it’s still the break of day,
Don’t be angry, I have to show you,
The sea has run away.
Now all you can see,
Are miles of rock and sand,
Why did the sea run away?
Is it scared of the land?

Chorus x2
I am off to dance with the fishes on the sand,
We will probably do a cod reel,
Waltzing fin in hand,
They wear moustaches and sequin suits,
They leap and sparkle ‘round my boots,
I’m off to the beach, come on and bring the band!

Chorus x2
I am off to dance with the fishes on the sand,
We will probably do a cod reel,
Waltzing fin in hand,
They wear moustaches and sequin suits,
They leap and sparkle ‘round my boots,
I’m off to the beach, come on and bring the band!

Verse 2
Quickly my parents pulled me,
To the highest room,
My Dad said “Hurry, the building’s strong,
The sea will be back soon.”
But I just sat and cried,
For the lost opportunity,
To spend my morning dancing,
With my new friends from the sea.