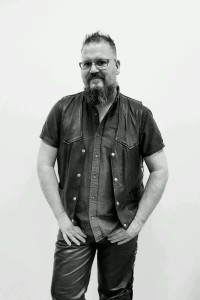 Born in the industrial heartlands of South Yorkshire, Kris started playing music from the age of 7. He started on piano before moving onto clarinet. Eventually he found his favourite instrument – Bass.

He’s been actively gigging since the 90’s and has performed extensively in front of some very large crowds across Europe and in the USA and has played at many festivals. He has spent many nights on tourbuses to which he says “never again”.

During his career he has played with many different bands from rock, to heavy metal, to progressive rock. He’s even been part of a US band as a session musician! He doesn’t do a very good American accent.

He originally met Martin back in 2011 – when Martin joined Manning. There’s a little scrapbook of their history in Manning here.

He is a keen blogger and has been writing his since 2004. He is also webmaster of the Ethryll site and is a keen photographer.